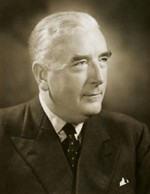 Education: First educated at a one-room school, then later at private schools in Ballarat and Melbourne (Wesley College), and studied law at the University of Melbourne