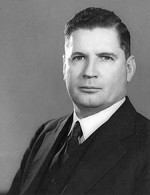 Education: Educated at state schools and later studied accountancy while working as a clerk