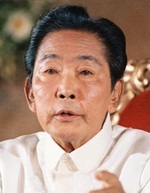 Date of Death: September 28, 1989
Cause of Death: Lupus erythematosus

Education: University of the Philippines College of Law