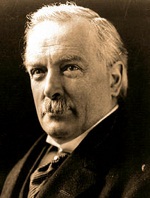 Political Party: Liberal Party of United Kingdom
Other Political Titles: Chancellor of the Exchequer, Secretary of State for War, Minister of Munitions, President of the Board of Trade, Leader of the Liberal Party, Member of Parliament for Caernarvon Boroughs