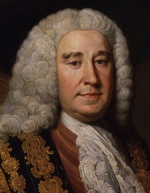 Political Party: British Whig Party
Other Political Titles: Chancellor of the Exchequer, Lord of the Treasury, Paymaster of the Forces