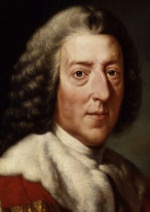 Political Party: British Whig Party
Other Political Titles: Member of Parliament, Paymaster of the Forces, Secretary of State for the Southern Department, Leader of the House of Commons