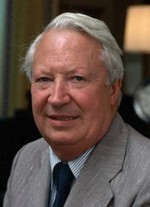 Political Party: Conservative
Other Political Titles: Secretary of State for Industry, Trade and Regional Development, President of the Board of Trade, Minister of Labour and National Service