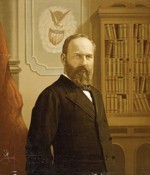 Preceded by: Rutherford B. Hayes
Succeeded by: Chester A. Arthur

Other Political Titles: Member of the U.S. House of Representatives from Ohio's 19th district