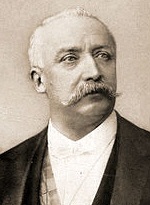 Political Party: None
Other Political Titles: Under-secretary for the Colonies, Vice-President of the Chamber, Minister of Marine